We are in the Exumas and find ourselves in a zone of unusual biological diversity at the moment, most of it marine, but some land-based fauna are exhibiting rather unusual opportunistic adaption to the sea.  Read on…

We had a great time skiing in Jackson Hole, Wyoming with the Stettners/Bohnes and returned to Marsh Harbour in the Abacos with aching quads and luggage packed full of nuts, snacks, favorite shower gel, chocolate and wasabi peas…most of which are impossible to obtain in the Bahamas.
We meandered south to Little Harbour and Pete’s Pub—the bar time forgot—and then jumped out into the Atlantic to make the long, rolly crossing to Eleuthera.  The swells were large, the wind was brisk, but the Puke & Vomit seats on the stern remained unused.  We both kept our breakfast (well done John!), but we did lose our brand new extra-large fishing lure at dawn to some unseen whopping fish that bent the rod into an impressive arc before snapping the line.

Provisioning in Spanish Wells completed, we started the stepwise journey south down the Exuma chain heading for Staniel Cay where our friend Ellen was to to join us for a few days.  The Exumas are quite different from the Abacos: most are more sparse, but the main difference is the amazing color and clarity of the waters and the noticeable up-tick in the types and weirdness of the animal kingdom (not even counting the locals, or Ellen).

On our way to the Exumas we were visited by a very playful pod of dolphins that swam along with Genevieve’s  bow.  Even Mother and Baby Flipper joined in the leaping fun.  Then, all of a sudden, at some ultra-high frequency “let’s roll”, they were gone.

At Allen’s Cay we heard there was a family of endangered Exuma iguanas, so we took the dingy to the beach intent on hunting high and low for the prehistoric Godzillas.  But we did not have to hunt long…as soon as Mimi’s bow touched the white sand, out from the undergrowth charged a lounge of mean looking lizards making us feel way more endangered than they were!  But as it turned out, they meant no reptilian malice, they just wanted to relieve us of fruity morsels.
Next stop, we went for a snorkel to try to catch an elusive lobster or two only to be treated with a sighting of a couple of sharks hanging out on the bottom close to Genevieve.  John seemed to pick up his flipper pace a tad on the way back to the boarding ladder.  A few days later we had a very sharky sighting just off the dock of Staniel Cay when the local fishermen started chumming the water as they gutted the catch of the day. Then, while sitting on deck at Norman’s Cay, gliding under our keel came a band of Manta Rays, each about the size of a Mini Cooper.
With Ellen, we went to see the famed swimming pigs at Big Major and fed them carrots and celery from the dinghy.  They are huge!  Then we motored around the headland to the Thunderball grotto—site of the 1964 filming of the eponymous James Bond movie—to dive under the rock ledge into the skylit cavern and feed the myriad, colorful fishes with corn.   Despite our skepticism fueled by the touristy hype, it was a great experience.
Ellen departed from very windy Black Point on a tiny plane, leaving us to laundry and planning the next step south. 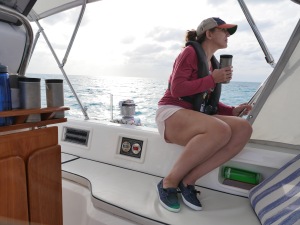 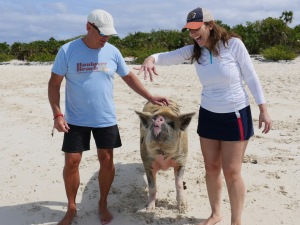