During our recent sojourn through Guadeloupe, friend Colin asked John and me if we’d like to join him sailing his Swan 62 across the Atlantic: New York to Gibraltar with a brief stop in the Azores. John said “hell no”.  Martin said “hell yes!”

Memorial Day, Colin (2) assembled his eager crew, Tom (3) Cillian (6) Chris (0) and Martin (0) and we sailed east.  (Score in paren’s represent number of times individual has already sailed the Pond!).  Our adventure, as follows…

A robust group gathered for a lovely leaving-lunch at Colin and Sue’s house before we hopped aboard the launch to ferry us out to the boat on a mooring in Oyster Bay.  John came out to help with the bags and wave us off.  Farewells made, we exported the well-wishers, slipped the mooring line and motored out of the bay.  Blue  skies, bright afternoon sun, no wind.

Long Island Sound was calm. Before long, three of the send off-lunch guests approached from astern in their fine motorboat to wave a final good bye as they steamed eastward, Maine-bound.

Thorough safety briefing completed, we settled into our watch system. Daytime
: two hours on watch followed by two hours stand-by; nighttime: one hour on, one hour standby. That way, the newbies, Martin and Chris, always had a mentor close at hand!

As Montauk, Block island and Nantucket slipped by in the dark the wind filled-in to 20-23 knots and we were close-hauled sailing at 8+ knots.  In the dark it was hard to say when we escaped the clutches of land, but by daybreak is was just us, out there, alone.

But we were not!  Suddenly, right next to us a huge upwelling of ink -black water creating a slick pool of ocean: a whale footprint! Two large brownish Bottlenose whales spouted close-by, followed by a few more, and then their pals. Soon we were surrounded by feeding whales.   They paid us no heed and, after an hour, we had passed through the cetacean dining room and we were alone. 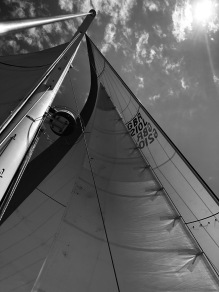 We expected 40 knots plus during the night, so prepared the orange-tipped storm jib on the inner stay, ready to go.  We hung on to the double-reefed main and genoa into the night until things became a little too spicy for comfort. So, we furled up the Genoa—unfortunately a bit too far in the gusty wind and managed to pull the reefing line out of the furler drum.  We lashed the sail to wait for daylight repairs and set the storm jib for the night. It was lively! Leecloths deployed to keep us in our beds, crawling along side decks to get into the aft steering cockpit, watchkeepers hudled under the dodger sheltering from the rain…the scene occasionally illuminated, paparazzi-style, by lightening flashes.  All crew were in full battle dress: layers, augmented with hats, gloves, boots, oilies.  Clipped on.

Hold on to your hats!  Awoken at 0700 by the smoke alarms robotically screeching “Fire! Fire! Fire!” All those in bunks shot out and found the salon murky with smoke.  The culprit was an alternator belt that slipped, overheated, scorched and disintegrated.  Tom and Cillian soon had a new one on, the hatches open to clear the air.  Later, while Tom and Cillian were bouncing on the bow furler-fixing, Colin and Chris at the helm, I looked up at the mainsail to discover a large vertical tear at the luff. Could it be getting bigger by the second?! Main sail down sharpish.

Fire extinguished, furler fixed, mainsail ripped; all before breakfast. No wind and very rolly, so not fun. But a lonely pilot whale spun by to check on us.

An afternoon of motor sailing with genoa only while Cillian and Tom engaged in the first round of the Great Atlantic Bake-Off resulting in banana bread as the first entry. Activities were puncuated by the rather disconcerting news from our weather-routing service that we should stay a bit south to miss potential icebergs! Night watch was treated to a light show from dolphins in the phosphorescent water speeding around the boat like agile,  back-lit torpedos.

Lazy day under power and poled-out Genoa flopping around, and annoyingly against 1 to 3 knots of current. Fishing, until inexplicably, the reel from one of the two rods decided to drop off its mount into 9000 feet of water!  Then Chris shamed us all by actually exercising!

for breakfast!  By afternoon, with wind and current, we were making 12 knots SOG (speed over ground). Everyone happy😁

But then the speed dropped a knot and Colin decided that we just had to set aside our Earl Grey tea and fly the spinnaker, which is bigger than the average house.  Launching the monster sail did not go quite as planned, but at least there was no one within in a thousand mile radius to see our antics.   We fought the spinnaker for two hours then put it away in its sausage bag for another day.

Great sailing and great progress at 9 knots considering the mainsail is triple-reefed (to contain the rip) in conditions that would otherwise call for the full sail.   1300 miles to go, so at least another seven days to the Azores.  No signs of scurvy yet.

Wind light to moderate but the forecast predicted that it would all but disappear for the rest of the way to the AZORES.  We don’t have enough fuel to motor the whole way, but at the moment we have great wind doing 9.5 knots.  Sunny, warm and flatish, ideal conditions to take a noonsite with the sextant…salty!

At dinner, we moved the ships time forward one hour to match our eastward progress.

Only 10 -12 knots of wind but no waves to speak of so we managed 10+ knots over ground with the aid of a handy current, now behind us. No need to motor while this wind lasts.  Weather balmy.  Another shorts and t shirt day.

All of a sudden a sailboat!  Out of the endless horizon appeared sailing vessel Creeky heading to the Azores from Boston by way of Bermuda.  Our courses converged until we were only couple of hundred meters apart. We chatted with them on the VHF radio and compared unsuccessful fishing notes.  After a couple of hours they slipped over the horizon never to be seen (by us) again.

Wind  dropping.  We topped-up the tanks from the spare 50-gallon diesel bladder stored in the dinghy and started the engine. Careful calculations and judicious use of the throttle meant we had made enough miles sailing to be able to make it to the Azores motorsailing if we had to.

Daybreak delivered with it a glassy, windless Atlantic covered with a million Portuguese Man O’War jellies.  But a squall eased out of the south bringing wind, which never stopped, so we could turn off the engine and sail again towards Horta saving precious diesel.

We saw some whales on the horizon and went to visit them.  They let us get somewhat close but soon became shy and dove deep. We moved on.  Probably better to let them come to us.

Early morning humpback whale sighting… then many more as the day progressed. The wind speed fell until we were motoring across liquid glass.  At dinner time a pod of decidedly un-shy Common Dolphins came by to play in the crystal clear water at our bow. They seemed genuinely as intrigued and excited to see us as we were to see them.

Another glassy calm morning.  Chris and I were standing on the aft deck wishing up the wind when a huge whale cut across our path, feet from our bow, blowing a noisy snort right next to us …the whale version of playing chicken!  Mr Whale, satisfied with making us scream, headed off to the Krill Cafe for breakfast.

Then we decided it would be a great idea to go for a swim in the middle of the 9000ft-deep end of the Atlantic. We found a jelly-free patch (not easy), stopped the boat, and dove in.  Refreshing. While in, Cillian dove on the prop and cut off a piece of plastic strapping wound around it. Recycle people!

Running downwind with poled-out genoa. 24 hours to Horta, Azores.  The wind direction was favorable to try again with the spinnaker.  This time it went up and flew like a dream We had a couple hours of fast downwind fun…until we blew the clew out!

Dawn brought a hearty “Land Ho” and by 9 am we had past the very impressive mountains of the AZORES and were safely anchored in Horta harbor.  Customs, trash, laundry, refuel, re-provision and lunch, in quick order! 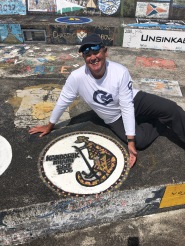 There is a long-held sailing tradition in Horta to paint your boat name on the sea wall.  I went to find the imprint left by our friend Pam and family on SV Kandarik in 1997 and again in 2006.  Still there. Still looking good. Tom and Cillian spent a lot of time and creative energy preparing our  chic contribution to the art wall. Then it was off to the famous sailors’ haunt, Pete’s Sports Bar, for dinner and WAY too many beers at Oceanic.

Next day was a slow start, but by 10 am we were in a taxi heading to the gaping maw of the sleeping volcano.  On the way, we got to see how lush, verdant and tidy the islands are. Houses are solid stone structures with red tile roofs.  All have a great sense of mid-Atlantic understated style.

By three pm we were back on board and heading out on leg two: 1100 miles to Gibraltar.

Finally some real wind!  Close to reach, making 9-10 knots for days, our personal dome of sky overcast and grey one minute, sunny and blue the next: Real Atlantic Sailing!  Although life below was challenging—heeled to starboard at 30 degrees—the boat (and crew) loved it as we galloped, surged, raced, towards Gib’.

came across a white ship slowly meandering around in the middle of the ocean.  No AIS signal, would not answer on VHF ch 16 until we told them that they had no electronic footprint.  They bruskly replied that they were a US navy warship.  In stealth mode we guessed. We just felt lucky they did not run us down given the US Navy’s recent stellar collision record!

The ocean became crowded as we joined tankers and freighters all heading to or from the Med’. A pod of Pilot whales waved as they sauntered by.  By evening the wind was pushing us home, sails wing-on-wing. We had a tasty last supper in the cockpit as we watched the last sunset of the trip.  Later, a bright gibbous moon lighted our way the last 80 miles to the Euro-African coast.

At daybreak: land ho!  Africa to starboard, Europe to port.  By 9 we had sailed into the Gibraltar straight and into a comfy birth at the marina. We celebrated with a washdown of the boat followed by an epic 7- bottle rosé lunch kicked off and closed by bookend espresso martinis.

After lunch we tipsily headed up the great rock to make new friends with the sometimes aggressive Barbary Apes and lean out over the vertiginous cliffs and admire the amazing view of the gateway to the Mediterranean. 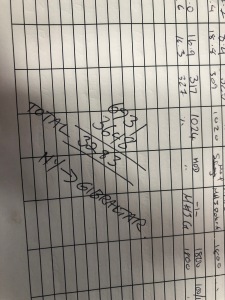 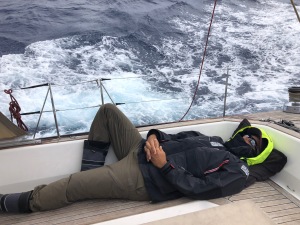 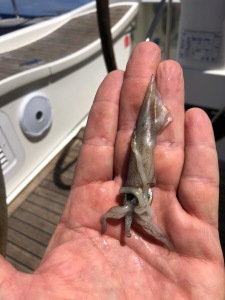 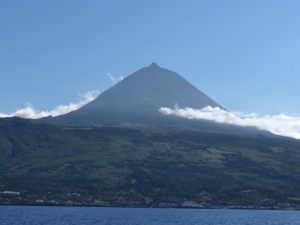 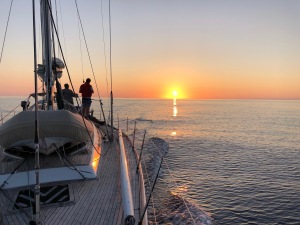 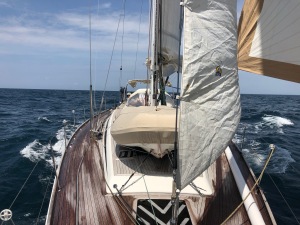 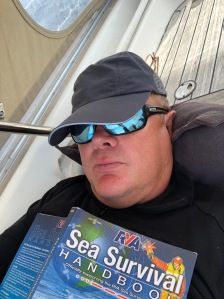