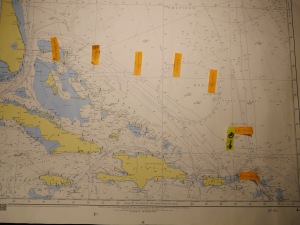 Crewmates Bob and Lee assembled and briefed, we cast off the lines from our happy home dock in Ft. Lauderdale on Tuesday, January 3 at 9:30PM. We waved a teary goodbye to Pam Wall and meandered down the canal to the 17th Street bridge.  It was drawn open at our request and we turned into the Port Everglades inlet and straight out into the dark Atlantic, heading due east.  The wind was fair, the Gulf Stream benign, and we had a steady sail through the night dodging ships traveling to points north and south along the
US east coast.   We threaded through the New Providence Channel between Grand Bahama Island, Great Abaco Island and Eleuthera to the south without actually seeing any of the islands save for the loom of distant lighthouses on the horizon and many cruise ships waiting their turn to regurgitate payloads into the Atlantis casinos.  By the end of day two we were in the North Atlantic.  We had company early on from Blue Kite, a catamaran also headed our way, but we soon separated from each other and lost VHF contact as Genevieve pulled away.  We have seen not a living soul since. 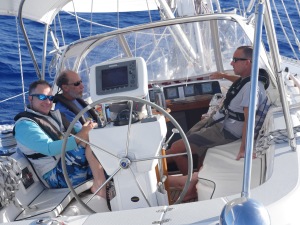 The crew fell into the watch system with two hours on, six off.  At night, the six were usually spent sleeping—when we could stay in our bunks without being tossed out—but during the day, aside from the odd catch-up nap, we chatted in the cockpit, trimmed sails, told yarns, listened to music and debated the world’s issues…with the luxury of some physical and psychic separation from the real world.  I did not sleep much during the first few days, anxious that we were on track, safe, and that Genevieve was holding together.  But as the crew found their stride, we soon adapted to the routine of sleeping, eating, sailing, keeping the log… but mainly eating.   No one was seasick, although when it got a bit rough there were some stony expressions from John for me to endure (I read them to mean “what the f**k are we doing out here in the middle of the f**king ocean!” or something).  But all that was forgotten when John scored a Mahi-Mahi for dinner.  Bob coached salty fishing tips and wielded the knife, Lee got the lemon, capers and olive oil ready to receive the fresher-than-fresh fillets. 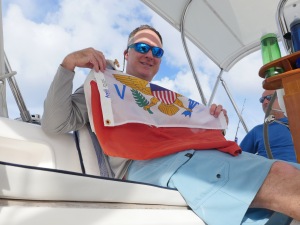 Our new Iridium Extreme sat’ phone came through with flying colors, allowing us to send daily updates of our position to our guardians back home and to receive excellent weather and routing advice from Commanders Weather, even occasional emails to quell the fears of loved ones back home.  Donkey the engine and the generator were not so cooperative.  Donkey was a bit sickly but still did a good job pushing us ahead when the wind died.  The generator ran well for the first batch of watermarking with the excellent new Cruise RO machine, but then died.  Battery dead, no charging possible.  A problem we thought we had solved…back to square one.

Genevieve sailed wonderfully, rising up over the large swells and wind waves without fuss and keeping us at our target speed.  So we are on day 6, or is it 7?  We are looking forward to seeing land tomorrow and starting our five month cruise around the Virgin Islands, joined by many good friends for some of the adventures, but I think we (well, Martin anyway), will be sad to have to share our isolated world again and leave the big beautiful wild ocean expanse behind.   Many thanks to Bobby and Lee for sharing this big sail with us.  The thrills, the solitude and the experience made all the better with your company. 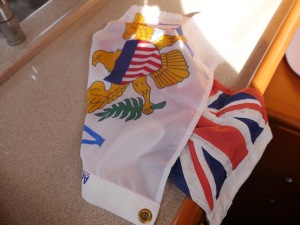 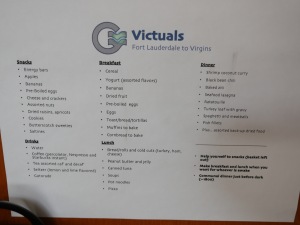 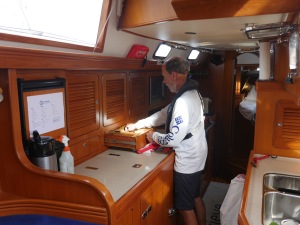 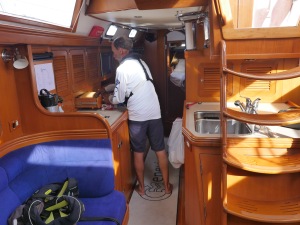 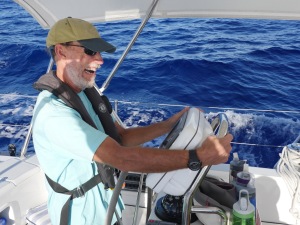 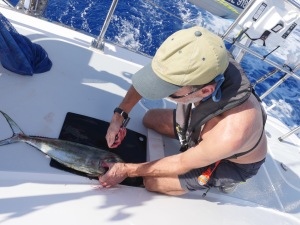 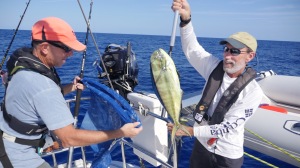